Adhesive selection in high dynamic load environments relies heavily on mechanical adhesive properties, including shear, peel and compressive strength. Over time and in the life a part, fatigue can occur to metals, plastics and adhesives. Fatigue weakens the overall strength of these components and can lead to premature failure. In the case of adhesives, shear strength values may depreciate an order of magnitude, from thousands to hundreds of psi due to a life of wear and dynamic movement, which can lead to failure. When selecting an adhesive for bonding a joint, the likely first choice is the adhesive with the highest shear strength with the assumption that the higher the shear strength the longer the part will last. However, upon testing, higher shear strength does not directly correlate to a longer part life.

Two-part epoxy adhesives are well known as very strong metal bonders with great resistance to environmental conditions as well as chemical conditions. Two-part acrylic adhesives are well known for their ability to bond plastics, resist vibration and impact. Henkel then combined both technologies with cyanoacrylate chemistry to develop universal structural bonders known as hybrids. These were formulated to bond to several different substrate materials, including both metal and plastic, as well as provide fast fixture speed while maintaining the durability of an epoxy and toughness of an acrylic. The goal of this paper is to evaluate the epoxy, acrylic and hybrid chemistry for fatigue resistance.

The shear strength was determined using a Henkel Lapshear Strength Method, referencing ASTM D1002-05, Strength Properties of Adhesives in Shear by Tension Loading (Metalto-Metal). For the shear strength testing, grit blasted mild steel (GBMS) lap shears were bonded with a 0.5” overlap and an induced 0.011” gap with glass beads. For Loctite® H8003™, which has built in 0.011” spacers, an additional gap was not induced. A minimum 7-day standard laboratory conditions cure was used. The testing was conducted at a crosshead speed of 0.08 inches per minute.

The shear strength results were then evaluated for a 95% confidence interval to determine the loads at which to be used for fatigue testing. The bottom level of the 95% confidence interval was deemed as the proof load (1 cycle) and used to determine the loads necessary to generate an S-N curve. An S-N curve is a stress vs cycles plot to determine finite and infinite life of an assembly. The percent proof loads tested were 20%, 40%, 60% and 80%, with a few exceptions. A limit of 36 million cycles was set for the test. ASTM-D3166 was referenced for testing. Specimens were cyclically fatigued (Figure 1) from the target proof load of 20%, 40%, 60% and 80% (σmax) to 10% of the target proof load (σmin). The specimens were bonded identically to the shear strength specimens, except a 0.4” overlap was used. 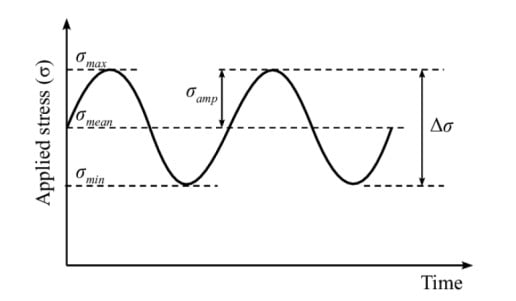 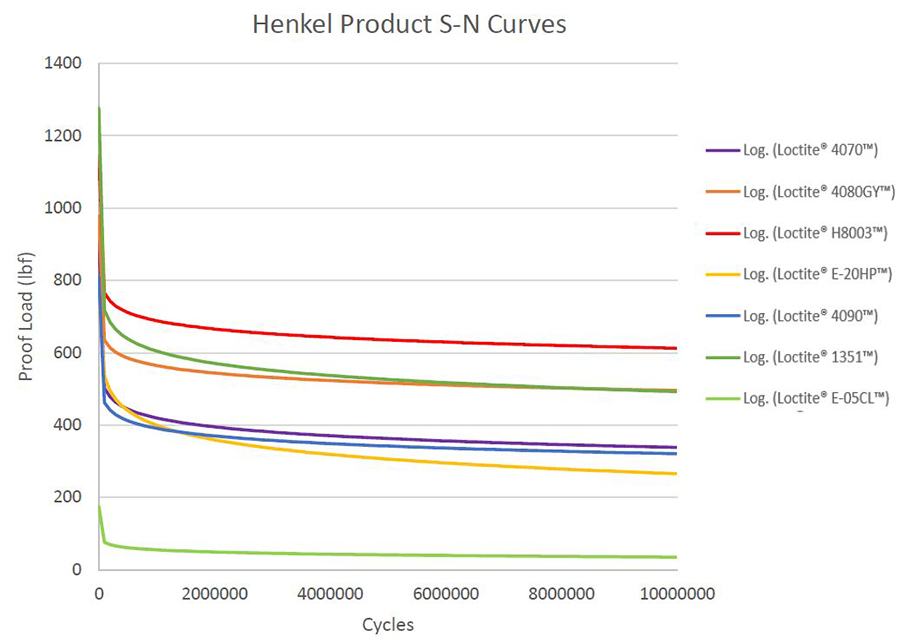 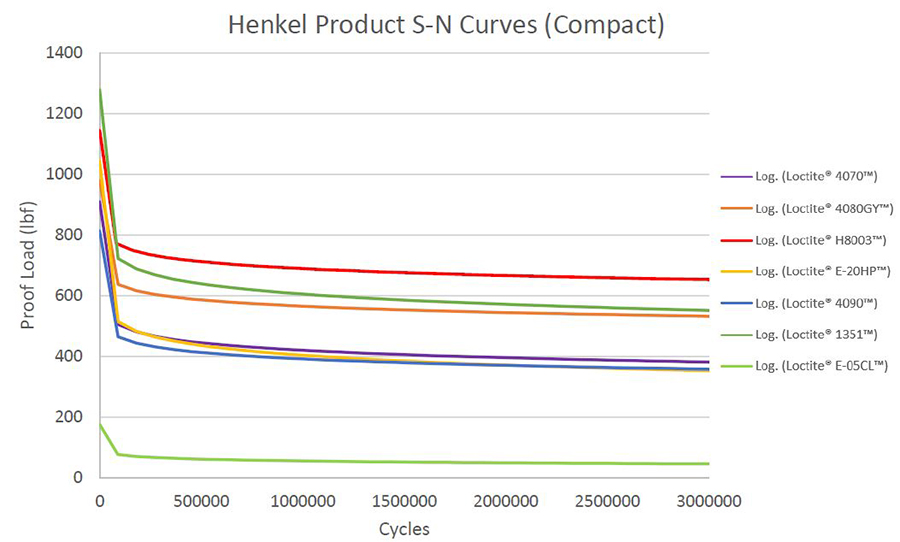 Overall, the highest limit of endurance was Loctite® H8003™ (MMA), which coincides with acrylics exhibiting high shear, impact and good elongation. The lowest performer was Loctite® E-05CL™, a 5-minute epoxy that is typically used for potting.

Hybrid adhesives lacked initial bond strength comparatively, but overall, performed better than the high performance epoxy, which is typically considered to be very durable. The rigid polyurethane adhesive, Loctite® 1351™, showed high fatigue resistance, but when there was >50% of the proof load, nearly all strength was lost within a small percentage of the cycles.

Robert Chen – for his contributions to the bonding and testing of the cured lap shears in both shear and fatigue.